The Kile Oak, Its Past and Present

There is a fascinating tie between the Kile Oak and the romance of its preservation for the people of Irvington.  According to the forestry experts, sometime in the middle 1600s, a lone acorn started the long history of the Kile Oak in the rich soil of what then was Indian country north of the Ohio River.

About the same time, in 1638, an English wheelwright named John Frye sailed from Southampton, England, arriving in Boston and settling in Andover, Massachusetts.  Four generations later, Major General Joseph Frye, commanding the Massachusetts Militia, served as aide to General Washington at the siege of Boston in 1775.

Two more generations later, a grandson of the General, himself a Lieutenant in the Revolutionary War, joined the “Ohio Company” in creating the first settlement in the Northwest Territories (now Ohio, Michigan, Indiana, and Wisconsin) at Marietta, Ohio.  There he bought 100 acres of land fronting on the Muskingum River.  Like all Revolutionary officers, his purse was crammed with “Greenbacks,” paper money created by the Continental Congress, then of dubious value, but worth face value in buying government land.

Two more generations later on February 13, 1843, Sarah Frye was born on that farm.  Later she married Oliver W. Kile, then fresh from four years in the Civil War, later Evangelist for the Christian Church in the State of Ohio.  After retiring from the ministry in 1901, the family moved to Indianapolis where three sons were then in the U.S. Mail Service.  Mr. and Mrs. Kile, seeking a location for their new home, spotted the big oak, and that ended their march.

Mrs. Kile’s interest in the family home in Ohio paid for the land.  And so the Continental greenbacks of a Massachusetts’ lieutenant in the Revolutionary Army spent their first 114 years procuring and preserving a family farm overlooking a beautiful river in Ohio, and then moved to Indiana to help preserve this oak for another 72 years and, hopefully, forever.

Mrs. Kile, one of eight children of the Oliver Kile family, was the last one to occupy the family home. She was head of the stenographic department of Eli Lilly and co., and personal Secretary of J. K. Lilly, the President.  Later she served in the office of Attorney General and of the State Superintendent of Schools for many years and completed her business career by managing a National Bureau for the live stock insurance companies of the nation for many years.

Miss Kile was known to her friends and neighbors and students of the adjoining schools as a dedicated friend of people, young and old, of the birds, and of every living thing.  She maintained both a book of clippings and also a “Visitor’s Book” which covered 45 years, containing signatures and tributes of hundred of “Guests of the Tree” from many states and some foreign lands.  She entertained the pupils of the surrounding schools periodically, serving tea and telling them the history of the tree as well as giving them a general nature study lesson.  Those two books are in the library at Benton House.  Sketches of the tree by Frederick Polley, a well-known artist, are in the book and have appeared in the Indianapolis newspapers.  Many other artists have sketched, painted, and photographed it.

Mr. Kile, Mae Kile’s father, was so attached to the tree that he requested that his funeral be conducted under the tree which was a most impressive service.

As early as 1926, Mae Kile started her campaign to “Save the Kile Oak”, and she had many friends who helped her.  She was determined not to sell to anyone who would not preserve the tree.  At that time, the Park Department was not willing to purchase the property, so she lived in the home even after ill health demanded that she spend her winters in California with a sister.   She always came back to her beloved Kile Oak in the Spring.

Finally, the Irvington Historical Society was formed and through a Lilly Gift the property was purchased on January 30, 1973.  Also included in this grant was an amount sufficient to demolish the house which was in such disrepair that it could not be preserved.  The Irvington Historic Landmarks Foundation, Inc. became the legal owner.

The Kile Oak is located on a large wooded lot in South Irvington at 5939 Beechwood Avenue.  The botanical description of the Bur Oak– “Quercus Macrocarpa” which is in the White Oak Group, is as follows:  Quercia is the ancient Latin name for all Oaks.   It is probably of Celtic origin, meaning “beautiful tree.”  It grows to its greatest size and highest commercial importance in the Wabash River Basin in Indiana and Illinois.

Ordinarily, it is seldom over 80 feet high, 3 feet in diameter, but some are 170 to 180 feet high and 6 or 7 feet in diameter.  The leaves are larger than all of the Oak leaves. Macrocarpa means large-fruited; it refers to the large nut.   The sweet kernel is edible.  Quer means fine and cua means tree.  The scientific name describing a fine tree with large fruit is peculiarly apt in the case of the Bur Oak, “Quercus Macrocarpa”.

The measurements of the Kile Oak are as follows:   Height, 87 feet; Crown Spread, 122 feet, Diameter, 5 feet; Circumference, 190 inches.  These measurements were made by the Indiana Division of Forestry at the time of Indiana Big Tree Registry.

The Kile Oak is the largest Bur Oak in any metropolitan city in the State and the 6th largest in the State, the largest ones being in the Wabash River Basin.  It is estimated to be between three and four hundred years old.

There have been many groups and individuals who have combined their efforts to “Save the Kile Oak”. The East District Community Relations Team of the Indiana Bell Telephone Company had a money-making, project and made over $1,300 which was spent to survey the property and to install a fence. The Irvington Brownie Scouts made a sizeable donation and the group came to help with the clean-up and the raking of leaves.  Also, a group from the Irvington United Methodist Church worked over a period of several days and raked up over 70 bags of leaves before the Dedication.  The Irvington Historical Society pays for the annual maintenance cost of the property.

It was learned through Mr. Richard Crum of the Cooperative Extension Service, that the Indiana Arborist Association, Inc. was holding a contest for the Outstanding Tee of the Year.   The Kile Oak was adopted by the Association and the tree, as well as the entire property, was the recipient of many hours of valuable service and care during the summer of 1973.

Their member organizations pruned and fed the tree, installed steel cables on the limbs, cut dead trees down on the property, and graded and planted grass where the house was demolished.   Members of the Kile Oak Property Committee, Mrs. Chiles D. Vawter, Mrs. George A. Miller, and Mrs. Russell Justice watered the grass over a period of three weeks, and now there is a beautiful stand of grass in that area.  The Committee continues to arrange for the grass cutting and leaf raking and will conduct tours upon request.  In the spring, five climbing roses were planted along the fence as a memorial to Mrs. Mildred Guthrie.   Mr. Wayne Guthrie through the years has supported the “Save the Kile Oak” movement through his column in The Indianapolis News.

It is the policy of the above-mentioned organizations to preserve the Kile Oak and the many wildflowers, perennials, and trees on the property.  It will be open and will welcome adults and supervised children’s groups to enjoy the beauty of the Tree and the Property.  It will be established as a nature study preserve and used for Outdoor Education.

Tulips were planted in the fall by pupils from school #85 under the supervision of Mrs. Peter Frick, the Principal, who had been very cooperative. Additional tulips were planted by Mrs. G. A. Miller, a member of the committee.  In addition to the bulbs that bloom in the Spring, there are many wildflowers, shrubs, perennials, and 19 species of trees on the property for all to enjoy and these have been labeled by the Green Thumb Garden Club.  Dr. Magdeline Davis of the Indianapolis Public Schools Outdoor Education has designated this as an ideal spot for Nature Study and Outdoor Education.

On October 26, 1973, at 1:00 P.M., a dedication ceremony was held on the property by the Irvington Historical Society and the Irvington Historic Landmarks Foundation, Inc., in conjunction with the annual meeting of the Indiana Arborist Association, Inc., at which time they presented a beautiful Bronze Plaque to be placed under the tree giving recognition.   All of those in the community as well as in the City and State were invited and came to the Dedication.

Later, the Indianapolis Park Department made a beautiful redwood sign giving the description and measurements to be placed under the tree, and a contributing member of the Arborist Society planted some evergreens under the sign.

Again on October 29, 1976, the Kile Oak was given recognition as a Bicentennial Tree of the Year and citing it as “a living witness of the American Revolutionary Period,” and another beautiful bronze plaque was placed under the tree.  Mr. Michel R. Baldwin, Forester with the Indianapolis Power and Light Co., was the chairman of this Bicentennial Tree Committee for the Indiana Arborist Society. Ours was one of three trees in the State that was honored.  Mr. John Duling, then President of the Indiana Arborist Association made the presentation to Mr. Richard Orton, President of the Irvington Historical Society.  We were honored also with the attendance of Mr. Robert Felix, Executive Secretary of the National Arborist Association, Inc. of New York.  This gift was made possible by the International Society of Arborculture, Inc., as well as the Indiana Chapter of the Arborist Society.

Since Miss Mae Kile had recently died in California, Mr. Orton requested Miss Mildred Campbell, to give some personal recollections of this remarkable lady.

As I close this paper which I shall dedicate to Miss Mae Kile, that persistent indomitable lover of nature who won ha fight to ”Save the Kile Oak,” may I quote a beautiful poem which I found in her book “The Story of the Kile Oak”:

O lovely tree, clothed in your winter gown of shining silver,
You stand alone, a silhouette against the clear, cold sky,
With the pale light of sunset streaming through your branches,
You face the high winds, the low winds, as they go rushing by.

O, beautiful tree, you gave your autumn gown of burnished gold and amber
To nurture bud and blossom beneath the drifting snow,
So when the warm winds, the soft winds come swinging into springtime
I may walk again where purple violets grow. 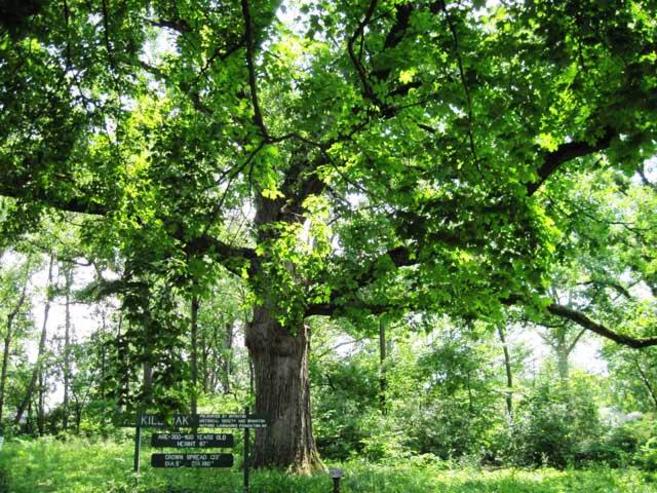